This morning was our 3D/4D ultrasound to see Noah. I was as nervous as I was excited. I have always had my reservations about 3D ultrasounds; let's be honest, the pictures you get from these usually make your "cute baby" look like a disaster. And, rightfully so, your fetus is still growing.
I was also internally struggling because at our 20 week ultrasound, I have a picture of Noah that is his ONLY face shot, and he is scary. For the last 10 weeks, I have felt like the world's worst mommy...How can I think my baby is ugly, and I haven't even met him?? Well, it turns out Noah just needed more time to grow into those skeletal bones. He needed time to get fat, and fat did he get!!
Our appointment started in 2D. Prior to our tech turning out the ultrasound machine, I asked her two things: 1) I would like to confirm the sex again.... God forbid, our little Noah really be a Noatte. It turns out that he is still a boy, thank GOD; The appointment before ours thought they were having a girl, and it turns out they were wrong... they are having a boy. I said an extra prayer that that wouldn't happen two appointments in a row! And 2) I told her that I am really wanting a profile picture of Noah. All mommies have a profile picture of their little Peanut from early ultrasounds...not me. He usually covers his face and goes to sleep. She said she would try. Little Noah was not only cooperative, but, it was the first picture he gave us. He was laying just right, where when our tech turned out the machine, we saw his little spine, and boom, our profile picture of Noah. Not only did we get an outstanding profile picture, he was kissing mommy's tummy!! 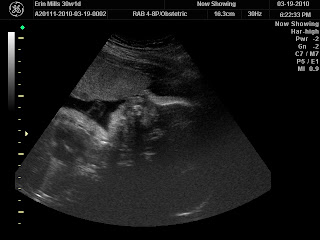 Our Tech regularly switched between 2D and 3D to get the best pictures. Here are the cutest ones, with descriptions:
Look at how defined these pictures can be; Two little eyes, a perfect little nose, and pouty little lips. The flat pancake looking disk next to Noah's chin is my placenta. It is in all the pictures; apparently, my placenta is on the top of my uterus - which is no big deal for the pregnancy, it just made pictures slightly more difficult to take. No matter what, he is cute to me!!! 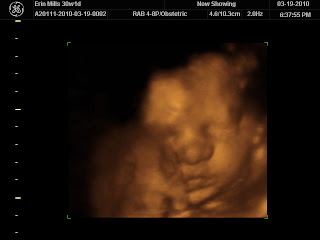 Look at this cute little button nose and that sweet little half smile. 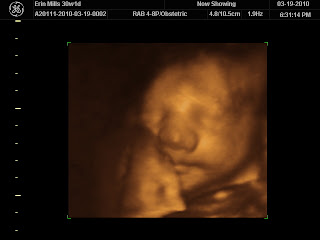 Here, Noah is opening and closing his mouth. He did this quite a bit through the appointment. 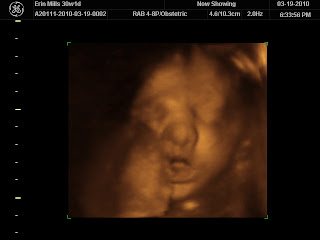 At one point, he streteched real big. It was weird to feel this on the outside, and see it on the inside. She captured a picture just as he was stretching his neck. I know it goes without saying, but he is such a little human already. (Duh!) He does things that little humans do. It is so weird to think that over the last 30 weeks, Noah has gone from nothing to this adorable little something. 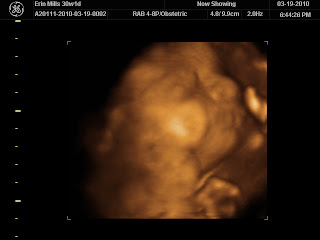 In this little picture, Noah is sticking out his tounge. I know it is hard to see. If it helps, his fat bottom lip isn't a lip, that is his tounge. It was much easier to see this in the actual video. 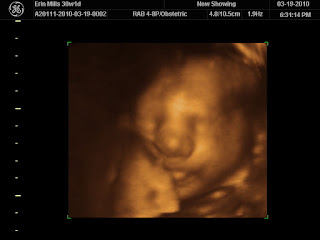 This is our little Noah pouting. Yes, it did come coincidentally when our tech was agitating my tummy to get him to move, but, he did start pouting. Isn't that the CUTEST little pout you have ever seen?? 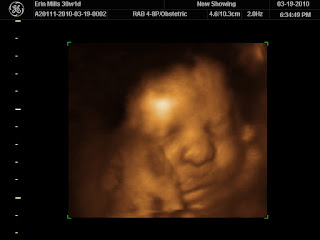 This is a picture of Noah sleeping; just being adorable and peaceful! 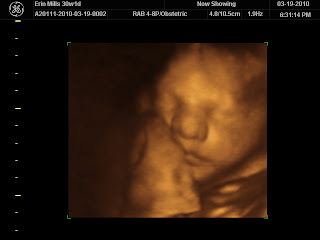 I am madly in love with my little boy... more than I was before, and I didn't think that was possible. We were able to see his beautiful features, cute little feet, CHUBBY little cheeks (sorry Noah - that is genetics.), and perfect little profile. He yawned; He smiled; he moved and kicked; he pat his face, sucked his thumb grabbed his feet. He was PERFECT. I could have watched him all day.... In fact, I have. I have watched his little 4D video twice today already. I am not positive I won't watch it again.
I love you little Noah. Thank you for cooperating, and thank you for being so very perfect. I can't wait to meet you; and I am so happy that it is only 9 weeks away!
Posted by Erin Mills at 10:45 AM